Faculty/Staff Guide to Work with UndocuHornets

1. DO NOT ASK STUDENTS ABOUT THEIR STATUS. This is a sensitive topic for undocumented students on multiple levels and asking about status could feel intrusive, confrontational, and like a violation of privacy and safety.

2. If a student discloses their undocumented status, know they are being vulnerable and trusting you with very personal information. Honor the student by validating the courage to share and COMMUNICATE YOUR COMMITMENT TO MAINTAIN CONFIDENTIALITY. NEVER “OUT” A STUDENT’S STATUS.

3. If a student discloses their status and you do not know how to help, do not simply refer them to another person/department. The student has already trusted and opened up to YOU. Let the student know you do not have the answer, BUT WITH THE STUDENT’S PERMISSION, you will consult with colleagues/departments to find out. If this requires sharing the student’s identity (student ID#) and/or status, GET THE STUDENT’S EXPLICIT PERMISSION TO DO SO.’

4. CREATE A SAFE ENVIRONMENT for undocumented students and make it apparent in your office/classroom, your words, and in your teaching/counseling. Some suggestions include: 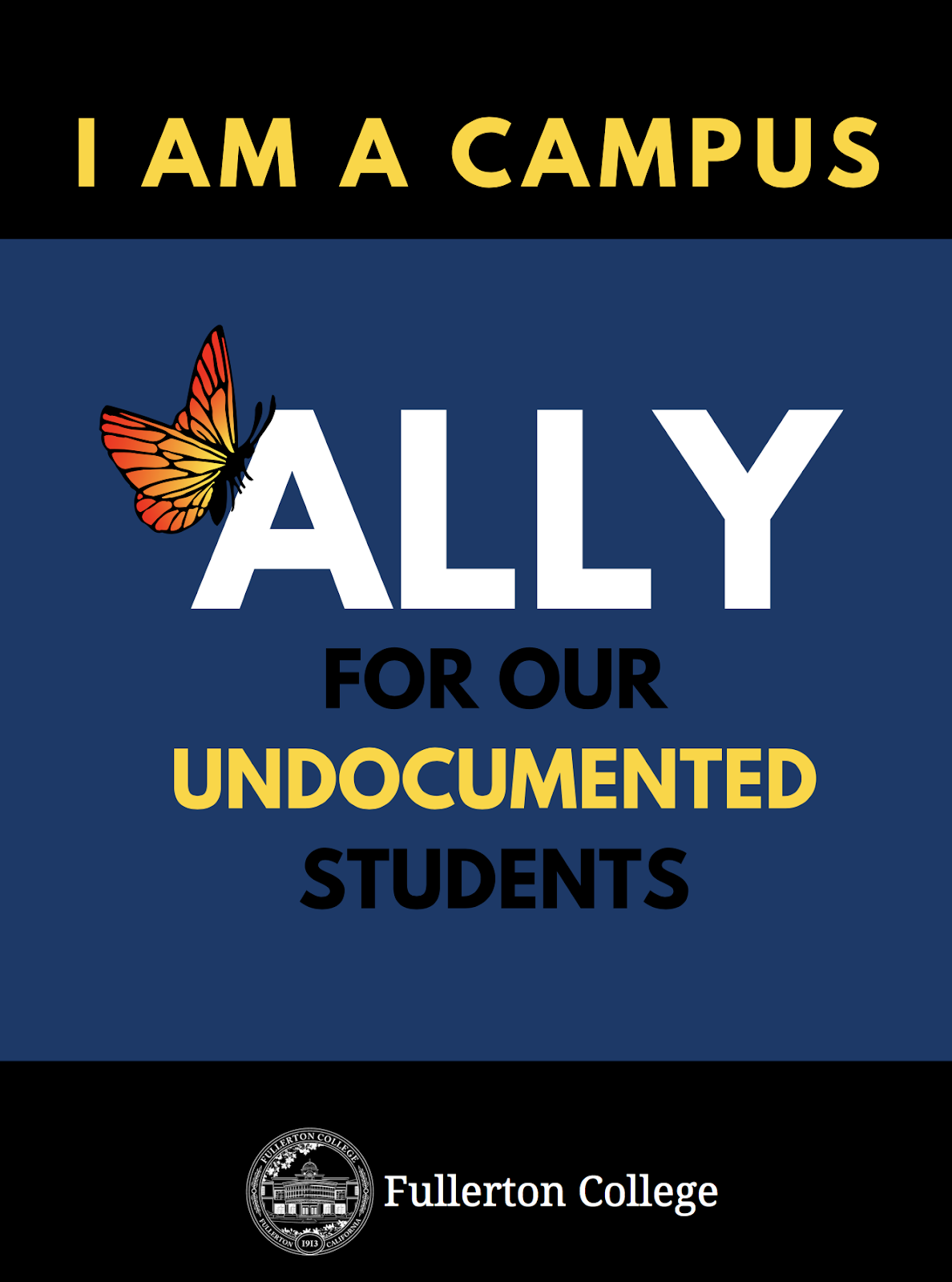 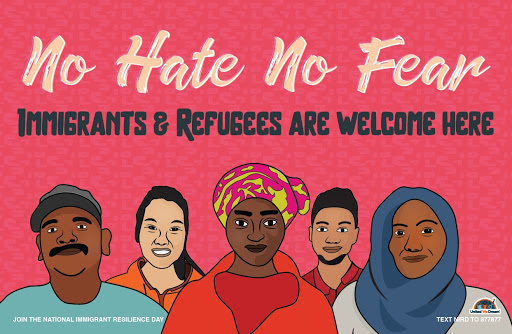 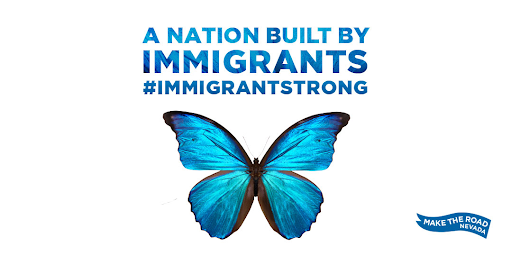 5. Use inclusive language and proper terminology. Avoid negative language and stereotypes when referring to Latinos, immigrants, and undocumented people (e.g. “illegal” or “alien”)

6. Include a statement about being an UndocuAlly in your office/class and on your syllabus

7. Display Fullerton College’s UndocuAlly Training decal, United We Dream office/classroom posters, or an image of a monarch butterfy, which is a recoginzed symbol for the undocumented community. The butterfly symbolizes the resilience and hope of the immigrant community in the same way monarch butterflies endure a long journey to arrive at its destination.

8. Do not react with surprise or concern when a student reveals they are undocumented

9. Do not expect a student who reveals his/her status to you to be the one to educate you

10. Don’t be offended if they don’t open up to you

1. Undocumented Immigrant: A non-citizen living in the U.S. without authorization from the federal government. The individual either 1) entered without inspection, or 2) entered with a valid visa or other status, and overstayed the authorized duration of that visa or status. Undocumented immigratns are subeject to deporation and are ineligible for federal financial assistance programs or social services.

2. Deferred Action for Childhood Arrivals (DACA): A 2012 executive order that provides undocumented young people (who meet certain criteria) a two year temporary administrative relief from deportation, and authorization to work in the U.S. In 2017, the Trump administration ended DACA. After a series of lawsuits filed against the administration for unlawfully terminating the program, the Supreme Court ordered the continuation of DACA applications. Currently (as of September 1, 2020), DACA renewal applications are being accepted, but no initial applications are being accepted at this time.

4. AB2000: Expands on AB540 to enable students to count years spent at CA elementary and middle schools towards the three years of CA schooling requirement.

5. SB68: Expands on AB540 to enable students to count years spent at CCC and adult education towards AB540 eligibility. Students with less than three years of high school in California, may earn any (remainder) of the required 1,260 hours via non-credit and credit attendance. One year of full-time attendance (non-credit or credit) is equivalent to 420 hours. Additionally, SB68 allows the completion of an associate degree or meeting minimum requirements to transfer to a CSU or UC as sufficient for students to qualify for in-state tuition and financial aid.

7. Federal Dream Act: The Development, Relief and Education for Alien Minors Act (the “DREAM Act”) bill would provide certain undocumented individuals who graduate from U.S. high schools, who are of good moral character, arrived in the U.S. as minors, and have been in the country continuously for at least five years prior to the bill’s enactment, the opportunity to earn conditional permanent residency. The DREAM Act was first introduced in 2001, but was never passed despite multiple legislative attempts.

8. ‘DREAMer’ Narrative: ‘DREAMers” were originally those undocumented youths who were advocating fo the DREAM Act. Most of them were well-assimilated students already in college or college bound. Implications of the DREAMer narrative included: raising the bar to unrealistic standards while marginalizing different groups of immigrants, legal complications created for the family/household, and perpetuates the burdens produced by the model minority stereotype.

10. Allyship: “An active, consistent, and arduous practice of unlearning and re-evaluating, in which a person of privilege seeks to operate in solidarity with a marginalized group of people.” (Anti-Oppression Network, 2017). “It’s not supposed to be a performance. It’s supposed to be a way of living your life that doesn’t reinforce the same oppressive behaviors you’re claiming to be against.” (Mckenzie).Sanctuary Schools and Campus: Educational institutions that adopt policies to protect students who are undocumented. However, schools and campuses are limited to how much they can protect individuals

11. Family Educational Rights and Privacy Act (F.E.R.P.A.): A federal law that protects the privacy of student education records. The law applies to all schools that receive funds under an applicable program of the U.S. Department of Education, including colleges and universities.

12. Advance Parole: A provision of U.S. Citizenship & Immigration Services (USCIS) allows people to travel back into the United States without applying for a visa. A transportation company (airlines) can accept an advance parole document instead of a visa as proof that you are authorized to travel to the United States.

13. Immigration and Customs Enforcement (I.C.E.): The bureau within the U.S. Department of Homeland Security (DHS) that enforces immigration laws and conducts the apprehension, detention, and deportation of immigrants.

14. Detainment: The government practice of incarcerating individuals while they wait for a decision on their immigration case.

15. Deportation: Expulsion of a non-citizen from the U.S. People who can be departed include non-citizens (including lawful permanent residents) with criminal convictions, visa overstays, refugee/asylum seekers, and those who entered without inspection. Once removed, a non-citizen faces a legal bar that prevents return to the U.S. for an extended period of time or permanently.

1. “Undocumented” is a broad term that includes all immigrants who reside in the U.S. without legal status, including those who:

Most undocumented students have:

4. Greatest challenges are financial
Other challenges: 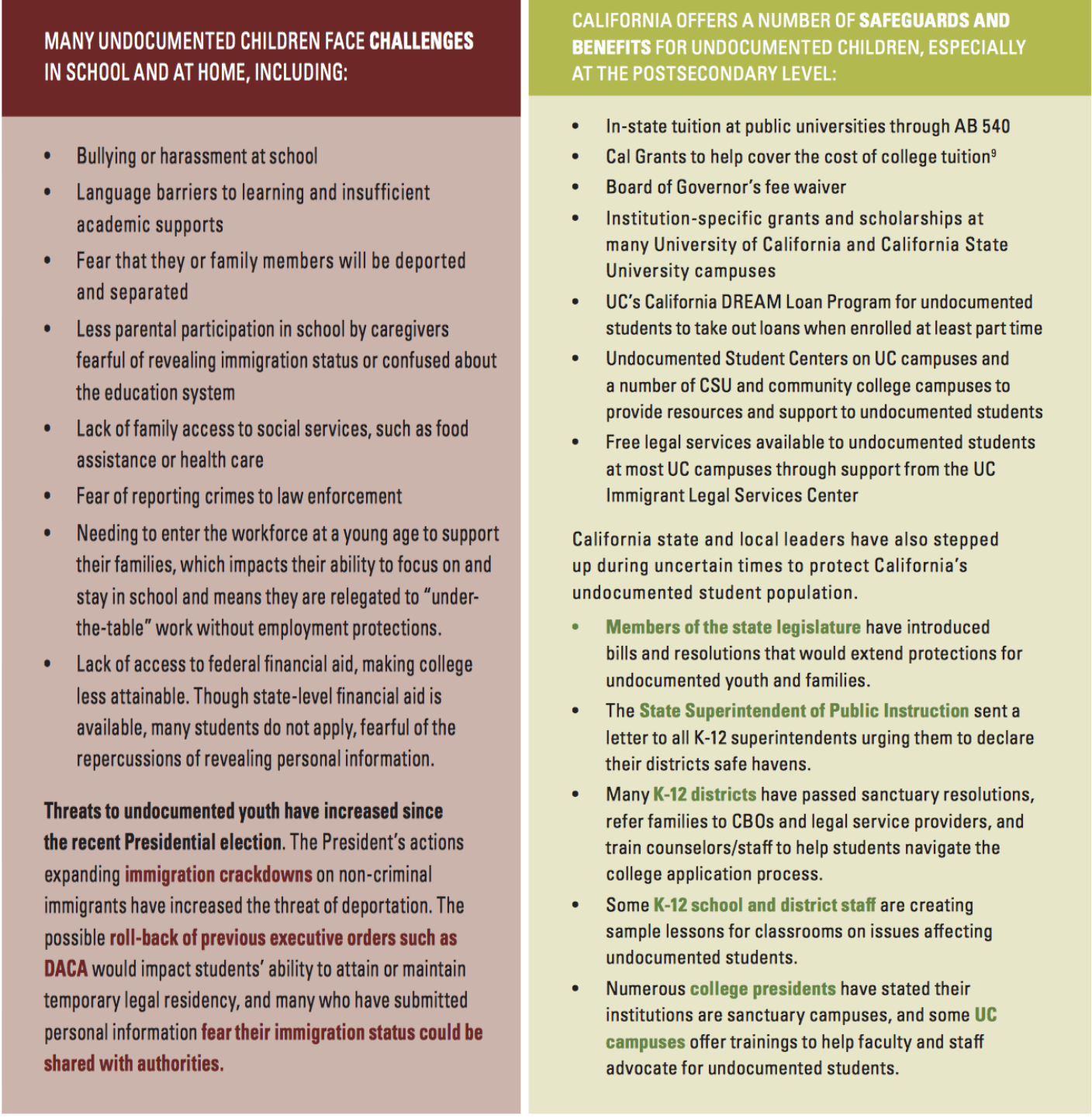 5. Growing up American and Undocumented infographic: 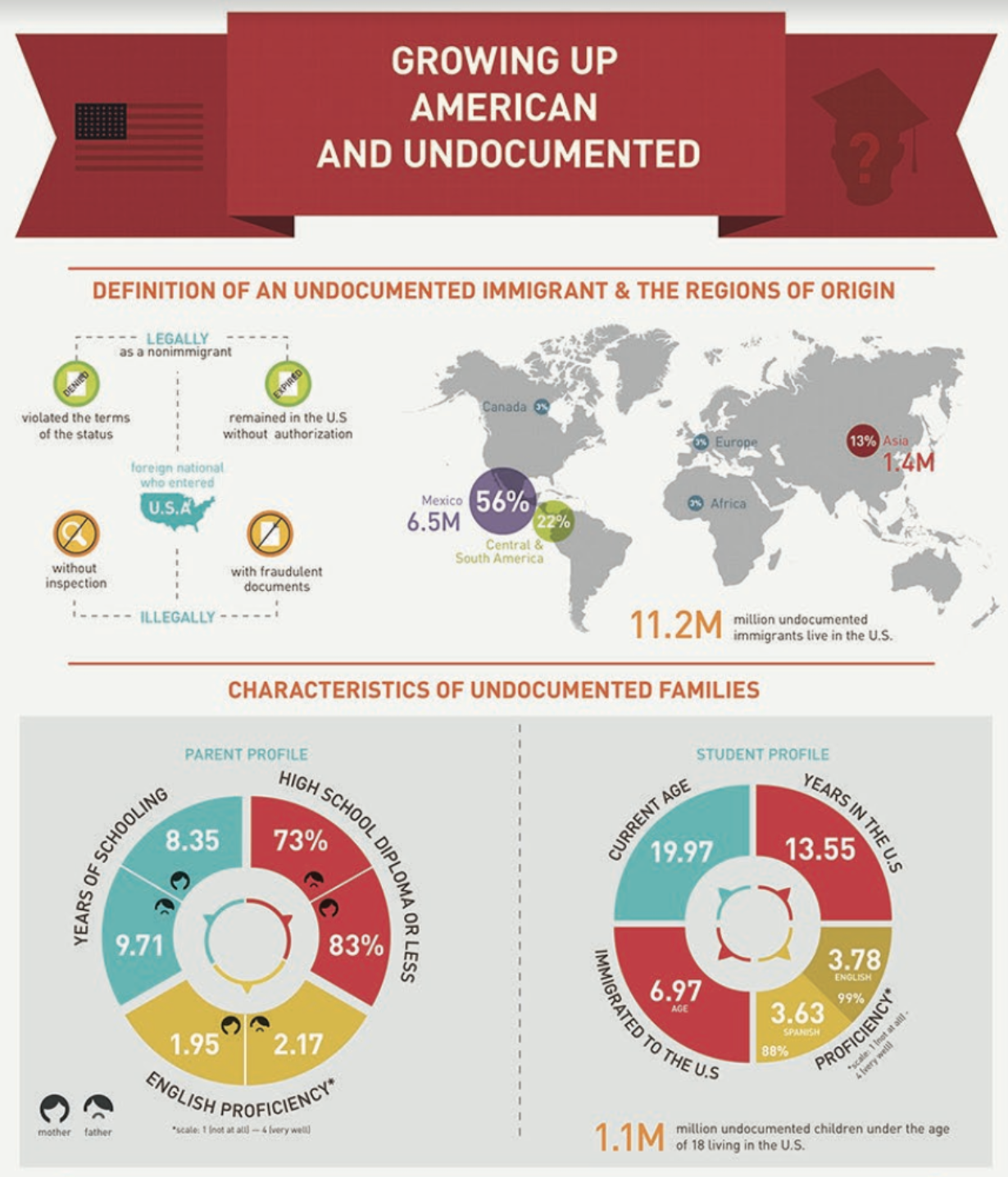 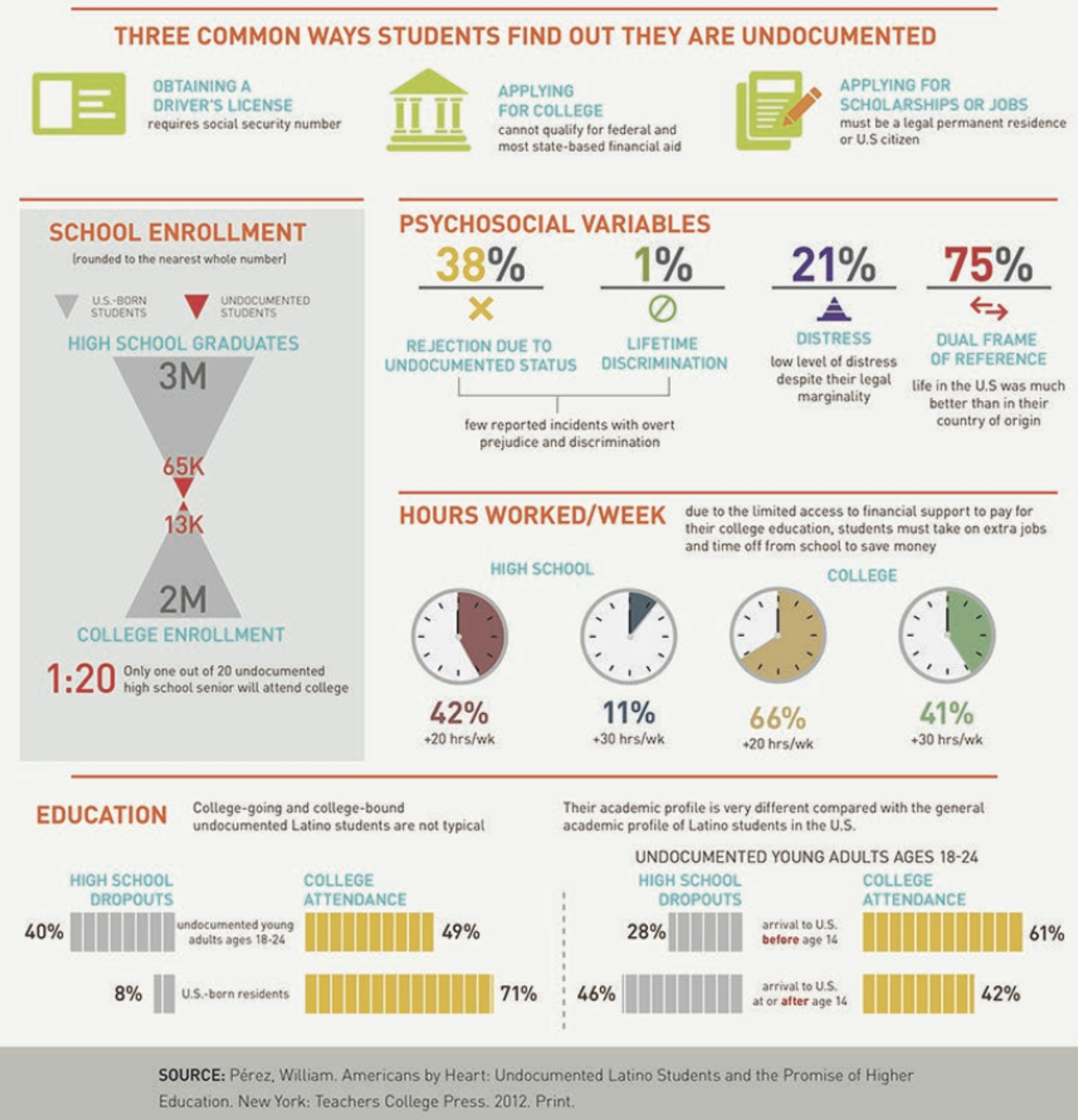 1. Undocumented students (including those receiving DACA) who meet the criteria for AB540, SB2000, or SB68, should file an affidavit at A&R in order to pay in-state tuition.

2. States that offer a way for undocumented students to qualify for in-state tuition and/or state aid:

1. DO NOT ADVISE UNDOCUMENTED STUDENTS TO FILL OUT A FAFSA APPLICATION without consultation from Financial Aid staff and/or an attorney, as submitting personal information to the federal government may pose a risk.

4. Students may meet AB540 requirements through non-credit coursework at NOCE.

5. 10 Things You Need to Know About the CA Dream Act Application (PDF)

9. Overview of types of financial eligibility for undocumented students based on AB540 and DACA: 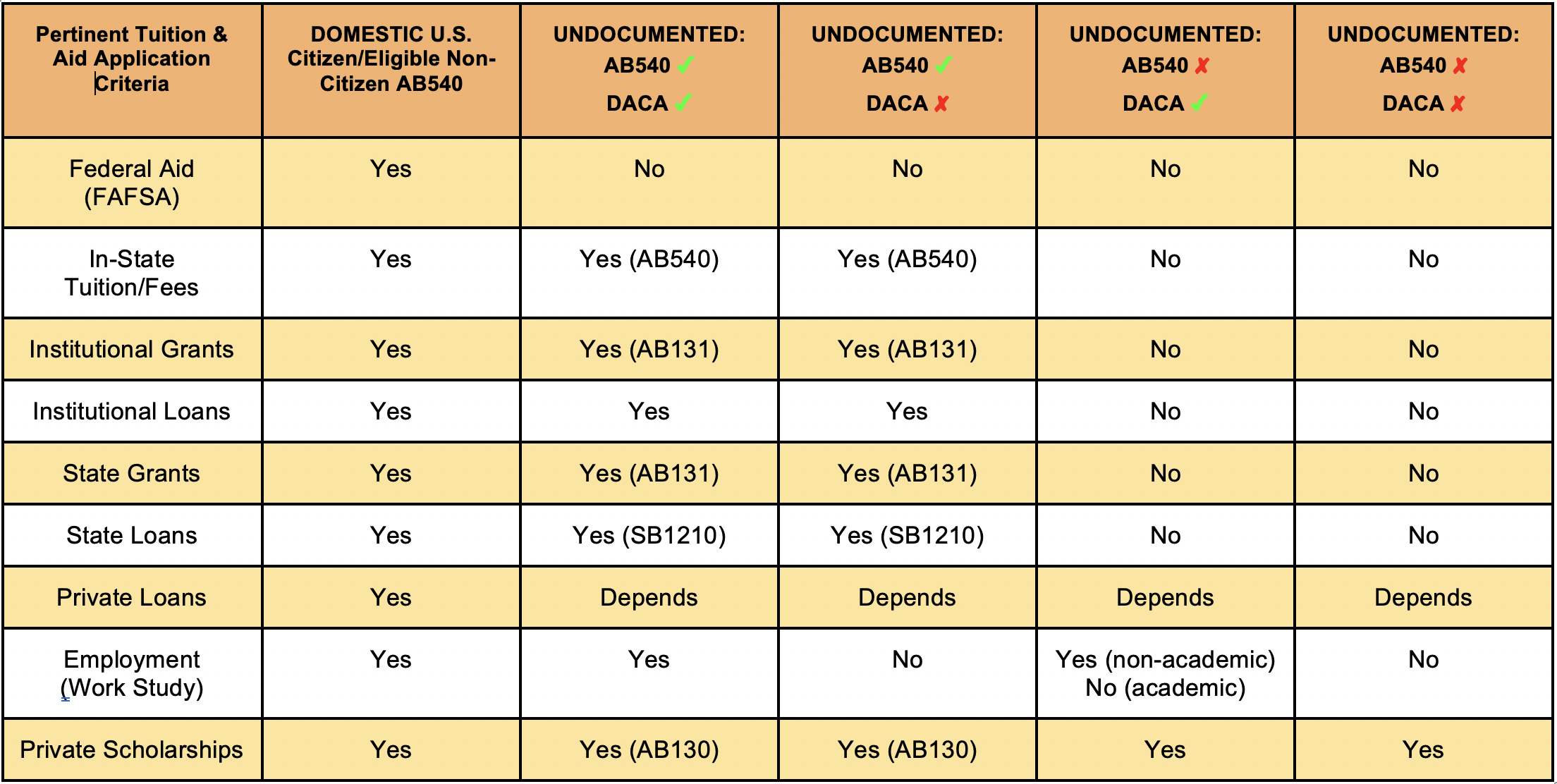 1. Visit the Grads to Be website for information on Know Your Rights workshops and Legal Aid Clinics.

2. If U.S. Immigration and Customs Enforcement (ICE) comes to your office or classroom:

a. Do not open doors. ICE cannot come in without a signed warrant. Tell them to pass the warrant under the door before you open it.Make sure the warrant correctly states your name and address.
b. Remain silent. ICE can use anything you say against you in your immigration case so claim your right to remain silent! Say “I plead the Fifth Amendment and choose to remain silent.”
c. Do not sign. Don’t sign anything ICE gives you without talking to an attorney.
d. Report it immediately to the UWD hotline: 1-844-363-1423. Take pictures, video and notes: badge numbers, numbers of agents, exactly what happened!
e. Fight back! Get a trustworthy attorney and explore all options to fight your case. If detained, you may be able to get bail – don’t give up hope! (Source: Immigrant and Refugee Children Guide)

3. If a family member is detained or deported, take steps immediately to learn where they are and what led to their detention and possible deportation. To help, arrange to speak to them, visit them and/or send an attorney to learn about the case and determine how they can defend their case. Some parents at risk of deportation may be reluctant to develop an emergency plan or even talk to their children about the risk of separation. However, developing a plan can help ease anxiety of the unknown, increase the chances of families being able to stay together should separation occur, and prevent children from unnecessarily entering the child welfare system. Parents should create a plan and share as much of that plan as possible with their children. Don’t wait – be proactive and plan ahead. Below are some steps you can take:

a. Identify a legal aid organization, legal advocate or pro bono attorney, and write down the organization’s or person’s contact information.
b. Identify at least two willing caregivers and write down their complete contact information.
c. Collect important documents for children, such as passports, birth certificates, Social Security cards, and school and medical records. And put them somewhere safe and secure but accessible to trusted family members (known to trusted family members). Make a copy of all documents and keep a copy in a safe place as well.
d. Save money for legal fees/bonds. Write down your information regarding financial records, bank statements, savings accounts, credit cards, etc.
e. Consider establishing a power of attorney for a designated caregiver, authorizing that adult to care for your children under the age of 18.
f. Do not carry any false documents.
g. Have your documents ready and organized: passports, IDs, attorney contact information, financial records, letters from immigration, and your Alien Registration Number, or A-Number, if you have a pending immigration case. All of these documents should be organized in a folder or binder for easy access in a place where your children, housemates or trusted relatives will be able to access it in case of an emergency. (Source: Immigrant and Refugee Children Guide)

4. Finding legal representation:
a. The Administrative Relief website (www.adminrelief.org) allows you to search for legal services by ZIP code and to modify your search based on what you’re looking for (e.g., for help after a detention, you can narrow your search to “Removal Defense Attorneys”).
b. The Department of Justice lists pro bono and low-cost immigration attorneys by state (www.justice.gov/eoir/list-pro-bono-legal-service-providers-map).
c. Visit the websites of the American Immigration Lawyers Association (www.ailalawyer.com) and the National Immigration Project (www.nationalimmigrationproject.org/find.html) (Source: Immigrant and Refugee Children Guide) 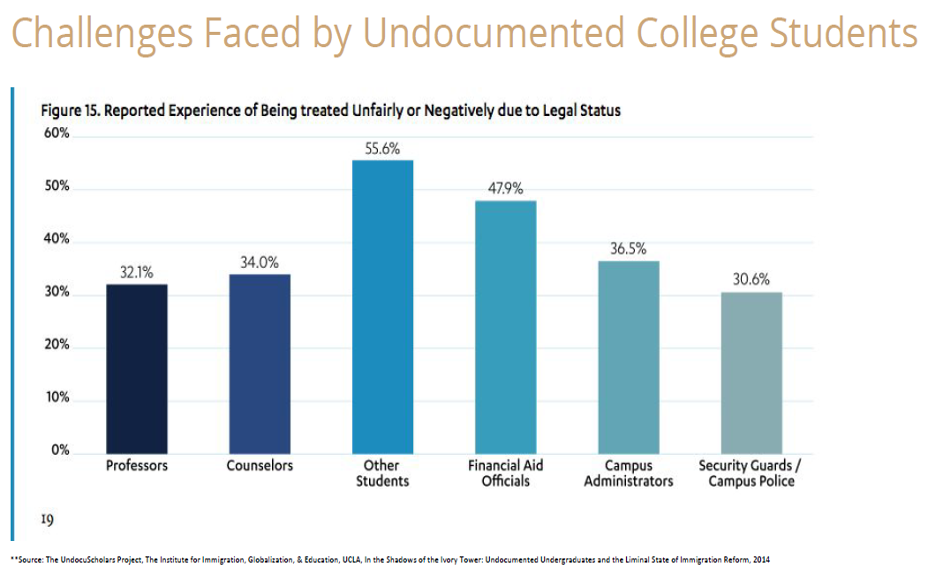 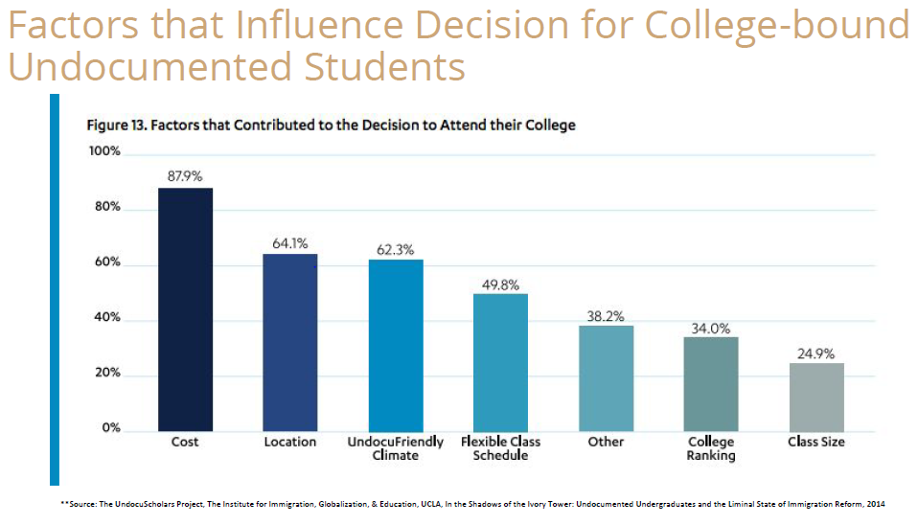 1. Study abroad can be approved for undocumented students with DACA through Advance Parole, but are still subject to inspection of eligibility to enter the U.S. (Source: https://www.uscis.gov/i-131)

1. Undocumented students hired for a job may not be paid by federal funds as this may be grounds for deportation and/or may compromise their path towards citizenship.

Transfer implications to out of state (travel)

Grads to Be at Fullerton College

1. The Grads to Be Program is focused on supporting Undocumented and AB 540 students by providing resources and services geared towards enhancing and supporting their academic journey and personal well-being. The program fosters a supportive and inclusive campus community, which is essential to the growth of all students, regardless of their status.

3. A brief (3m) video about Grads To Be at Fullerton College

5. For updates on events and services, or to request a classroom presentation, visit the G2B website and connect with us: